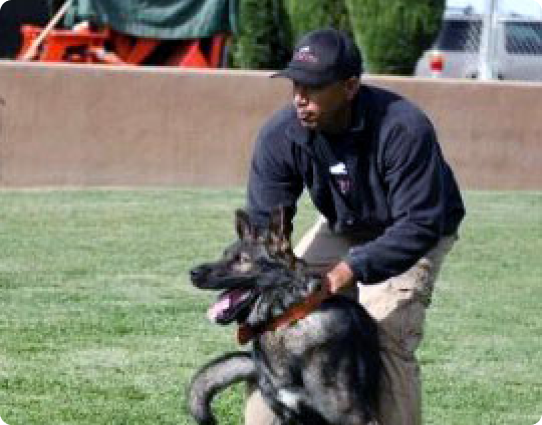 Brent has been training dogs for over 30 years. He has also been involved in the breeding of German Shepherds since early childhood. He trained his first dog in obedience and protection at the young age of seven years old, under the direction of his father, Calvin. Brent has been conducting private, group obedience and protection classes in the San Jose area on an on-going basis since he was sixteen years old.

As a teenager, Brent also conducted group obedience training classes for the City of San Jose. Understanding the way dogs think and behave, Brent is able to predict a dog’s action based on it’s demeanor. Brent’s expertise was developed from daily interactions with dogs since early childhood. He is an expert in dealing with dogs that display extreme aggression, shyness, hyper activity, dog aggression, and many other problem behaviors.

Currently, Brent continues to work with clients throughout California for obedience training, protection training and solving problem behaviors, while also maintaining a German Shepherd breeding kennel in the San Jose area. Brent has been involved in the training of literally thousands of dogs and therefore has developed an uncanny ability to understand how dogs think.